Use a vibrant render of Conway's Game of Life for a wallpaper!

Processing is a hybrid language/package/IDE for learning how to code. It’s particularly well-suited for a graphics environment, with the main 2 functions being setup() and a draw() loop. It’s very similar to Arduino; in-fact the IDE is almost exactly the same as Arduino’s, and there are many cross-compatibilities between the two. One of the first hardware projects I ever designed was a visual graph for the Digital Input 0 pin of my Arduino. It abstracts away most of the nasty graphics programming elements, like interfacing with lower-level libraries, and allows the developer to focus on the logic of the application, and more importantly, the look of the end result. This also means that whenever Processing is ported to a new environment, all the underlying graphics development has already been accomplished.

This is why I was ecstatic when I found Processing for Android. It’s available as both a desktop extension for Processing (with Android Emulator support), and as an Android app with all the features of the desktop version (git push/pull, compile to Signed .apk file, live wallpaper export, etc). This has been especially powerful for me, as I’ve tried several times to pick up Android programming, but was turned off by the UI-driven design (despite my love for GUI development, ironically).

When I first installed Processing for Android on my phone (APDE for short), I was pleased to find Conway’s Game of Life as a sample. Putting a Game of Life live-wallpaper on my Android was one of the first things I did when I got my first smartphone. It was a simple black-and-white simulation, similar to the vanilla example provided by Processing.

The Game of Life(GoL) is a “Game” created by British mathematician John Horton Conway in 1970, and is the quintessential example of “Cellular Automata”. In short, cellular automatons are systems consisting of “cells”, each having a number of states. In GoL there are only 2 states: alive and dead. With every discrete iteration, the cells change their current state based on a function of their current state, and the states of their neighbors. The GoL only has 4 simple rules:

From these 4 rules, very complex behaviors can emerge. Many different patterns or “lifeforms” have been observed, some so complex they can self-replicate or even simulate the GoL within itself. It’s an elegant example of how complexity can emerge from a simple set of rules.

The GoL is an example in the base distribution of Processing, so I’ll include a link to it here. However, it’s a bit bland looking, and could use some sprucing-up.

Since we want the wallpaper to fill fill the whole screen, we need to change the canvas size, from arbitrary numbers to displayWidth and displayHeight.

The obvious first move would be to add variable cell-sizes, so your poor Samsung Galaxy doesn’t get hammered with a 2560x1440 sized world. We add final int CELL_SIZE = 16; to the top of our file. It could be any size, but 16x16px seems to look good on my display.

sx and sy, the width and height of the world respectively, are recalculated by dividing by CELL_SIZE

One can convert from grid to pixel coordinates by multiplying by CELL_SIZE, and vice-versa. Having a helper function makes the code a lot cleaner.

Finally, we want to change the line where the pixels are set(x, y, #FFFFFF), instead opting for CELL_SIZE squares. 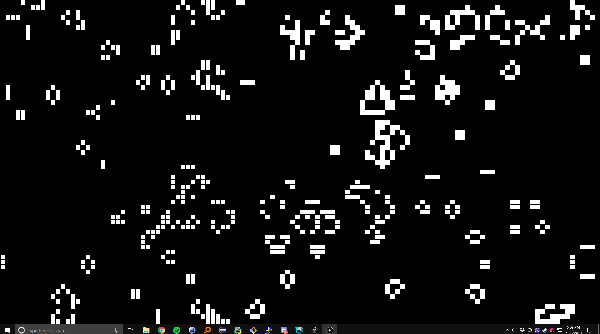 But, the whole black-and-white aesthetic isn’t really working for me; let’s see if we can do even better.

The time-step evolution of the world looks really jerky, no matter how you mess with the framerate. Having cells fade away could give some extra dynamics to the display, as well as let the “player” know what just happened in a quickly-changing simulation.

To implement this, we’re simply going to be using the alpha channel of the color, or it’s transparency. We need to keep track of the alpha of each cell so it can be drawn correctly each time draw() is called.

We start by creating a 2D array int[][] alpha_map;. We also create a final int FADE_RATE to subtract from each dying cell. I use 36. In setup(), we initialize values to 255 (full visibility) when we randomly turn on cells.

Anywhere where we turn on a cell in the draw() function, we must also reset the alpha_map value to be 255. Otherwise, we subtract the FADE_RATE from alpha_map[x][y]. Finally, we move the fill(), rectMode() and rect() drawing calls to the end of the draw() function and guard them with if (alpha_mask[x][y] > 0). Alpha values should stay between 0 and 255. 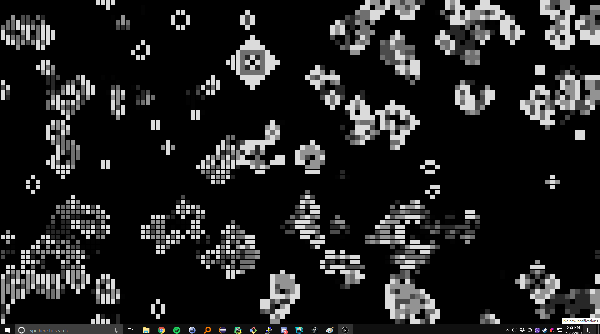 Grey cells are considered “dead” by the simulation and are being animated out of existence.

However, this is an Android live wallpaper. So we need a gaudy amount of RGB colors moving around all over the place. Let’s try coloring the cells based on their location in the picture.

Again, we create and initialize an array, this time of type color, and a constant COLOR_SPEED determining how fast they change. We also set the colorMode from RGB to HSB, which stands for Hue, Saturation, and Brightness, so we can directly manipulate the hue more effectively.

Then, in the draw() function, the color_map is updated for each cell. Here, I’m using a circular function to calculate the hue by adding the sin() and cos() of the coordinates. We add 127 (half of 255) so the result is non-negative.

Finally, we should give a little interactivity to this Wallpaper. After all, eventually the simulation will reach homeostasis and stop producing any dynamic results. Touches/Clicks should bring the corresponding cell to life in the next frame. With the setCell function, this becomes trivial to make cross-platform:

When done correctly, the final product should look something like this: 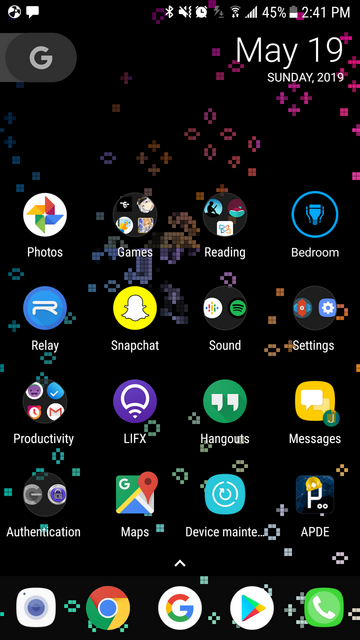 This is just scratching the surface of what APDE can do. I hope to incorporate more of the Android API into my live wallpapers as development continues.