Daylio is a simple smartphone app for tracking your daily mood, along with the activities you did that day and a short, optional memo. The app is quite flexible, allowing the user to add different moods, more activities, and (most importantly) see their statistics over time.

However, many of the stats are limited by seemingly arbitrary restrictions. A calendar year-change causes a hard break in the data; you can’t see your entire dataset from day 1 in a contiguous manner. However, Daylio offers the capability to export one’s data as a .csv file. The data is almost perfectly formatted for Machine-Learning/Data Mining applications, so I decided to try taking a look at my own data to see if I could find any patterns using a methodology not available through the Daylio app.

I’d also just come off another Machine Learning project, the Discord Social Graph, where I’d used mpld3 to convert matplotlib plots into d3 interactive graphs. This was straightforward enough, but I’d heard about an “interactive visualization” library called bokeh. With bokeh, it was much more straightforward to create a web-based plot and add controls/interactivity than with any matplotlib/d3 plot. Using bokeh, I was able to generate a plot of my mood since I’d started using the app, >1 year ago. I could also visualize the output of my Machine Learning models by overlaying their predictions on top of the original dataset. This also made calculating cumulative-metrics, like total mood counts, much easier (which, to be fair, Daylio can do, but again, not over periods >1 year).

Moods can easily be converted from categorical strings to ordinal numbers. They map nicely between [-2, 2]. Converting the moods to decimal numbers also allows for Regression Estimators to be used. This also allows error to be reduced, as the estimators can choose values between the discrete mood values.

One can also reduce the feature set to see which activities / features influence their mood the most. This is achieved through an ExtraTreesRegressor and SelectFromModel. This automatically finds the most statistically-influential features of the model, and retrains the classifier on the given feature subset. This almost always reduces model-performance, but can give the user an impression of what affects their mood the most.

Some derived features are also added to increase the dimensionality of a given sample, such as:

A Polynomial Feature Cross is also introduced to these engineered features, in an attempt to find cross-feature interactions or particularly strong features (by including the exponential components as well).

Relevant parameters to the model and the feature selection can be changed with sliders on the left side of the webpage. After changing a parameter, the “Run” button must be pressed to re-run the fit-predict procedure on the model.

As mentioned earlier, the most pertinent indicator of mood was the sentiment analysis of the sample’s memo. Adding this feature gave my model an accuracy boost of ~20%, pretty much across the board. When performing feature reductions, Sentiment^2 as well as Sentiment were always included in the results. The linear relationship between mood and Sentiment is best illustrated in this seaborn plot: 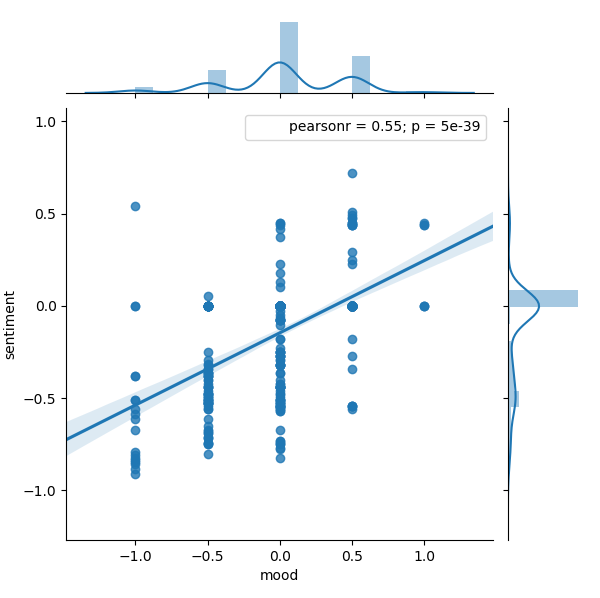 Using a Violin Plot, one can see that a negative mood almost always comes with a negative sentiment. This makes sense, as if my day is especially bad I tend to write about it. Conversely, if my day goes well I’m likely to write about it as well. Finally, I tend not to write anything on ‘meh’ days. If your day is unremarkable, you can’t remark on it.

As an additional form of feature visualization, I tried using t-SNE to project the features onto a 2D plot. Initially, this provides a pretty sparse representation: 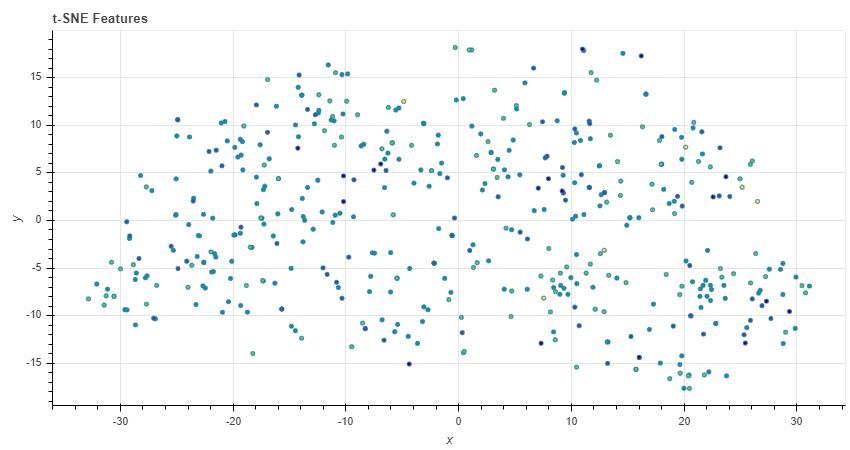 However, if we use the “Reduce Featureset” button, a new pattern emerges:

Oftentimes the number of clusters in the plot corresponds with the number of features chosen by SelectModel. This shows high-dimensional data being successfully embedded in lower-dimensional space. Full disclosure, I’m still learning about t-SNE, so I can’t fully explain the significance of this plot (yet).

While this tool isn’t intended to treat or diagnose any illness or disease, it can give some insight into what activities are affecting your day the most. Long-term visualization and cumulative metrics are also available, something not offered in the original version of the Daylio App. Hypothetically, Daylio could include these in a webapp, doing all the heavy ML lifting on their own servers, and sending the resulting graph view back to the user. The app already performs backups of user data, so it’s already out there on the “cloud”. While it’s important not to be hasty when adopting new technologies into healthcare fields, especially those fields dealing with the brain, it’s Computers’ ability to quickly parse and collate data that have made them so critical to human-progress. If these new algorithms can be a defense against the uncertainty and chaos of the postmodern world, then its our imperative to try and at least understand them.